Pepper Ghost Holographic Projector With Single Reflector V.01.2 is the following up mini-experiment after the experiment of The Pepper’s Ghost Projector V.01.1. It’s a small experiment about how to make a projector tool to create a simple Pepper Ghost illusion that is quite popular to use in various performances since successfully implemented by John Henry Pepper on the theatre performance during the production of Charles Dickens’s “The Haunted Man” in 1862.

During the development of Pepper Ghost Projector V.01.1, there were several problems noted about the first model that need to enhance in the development of Pepper Ghost Projector V.01.2, which are the source image device position flexibility, the mirror effect of reflection that creates the ghost image as a negative image and the last note is about the transparent sheet thickness in order to make a proper ghostly image.

The first development is switching the cell phone position, which is moved from under the reflector structure to the top position, which allows the cell phone could change or move easily without disturbing the position of the projector box. At the same time, a mirror will be added as the reflector device’s new attachment and placed face by face with the cell phone, which is used to invert the source image as a negative image. Instead of reflecting the image from the actual source, the transparent sheet is actually reflecting the negative image on the mirror glass and inverting it back as a positive image. 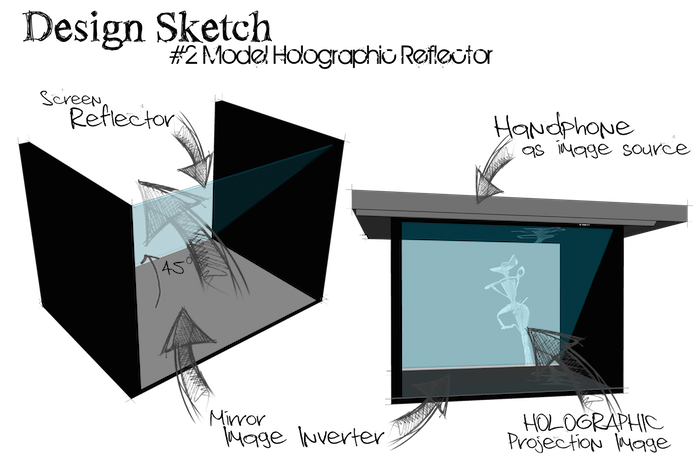 The second repair made on the first model of Pepper Ghost projector is changing the former transparent sheet material in order to decrease the parallax that happened, which is replacing it with a 0.5 mm thick acrylic or plexiglass sheet.

The last arrangement is to make a box structure base on a new concept schematic and painted the box with a black matte colour to prevent the reflection of images from all the sides of the projector to the main screen. 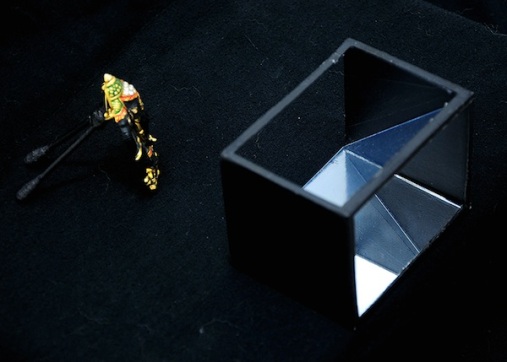 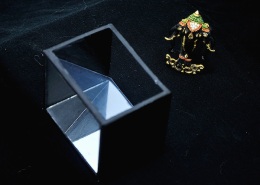 The conclusion from the model of Pepper Ghost holographic projector V.01.2 experiment is working as expected. It already solves all problem notes on the V.01.1 model, which is successfully replacing the source image device position, the addition of a simple image inverting mechanism, and solving the last note with a new material thickness to decrease the parallax effect. At this point, although The Pepper Ghost Holographic Projector V.01.2 schematic model became the simple basic projector with a single reflector model for another development, it still has some development notes, such as: