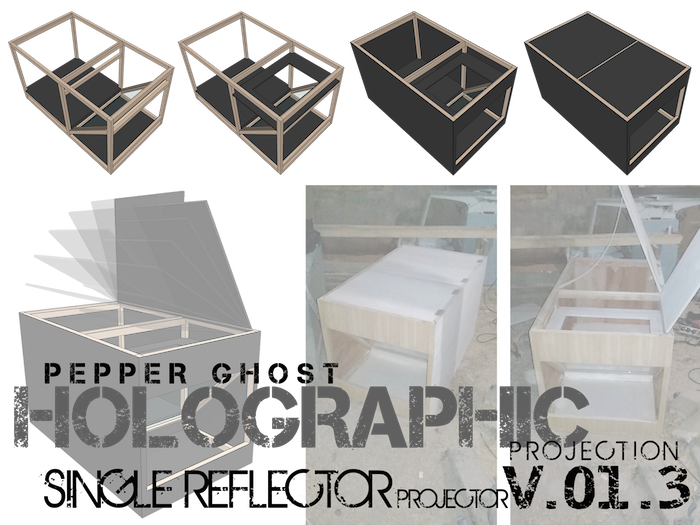 Pepper Ghost Holographic Projector With Single Reflector V.01.3 is the following up experiment of the Pepper’s Ghost holographic image projector with a single reflector Version V.01.1 and Version V.01.2, which are small experiments to make a simple projector tool for Pepper Ghost illusion that quite popular to use in various performance since successfully implemented by John Henry Pepper on the theatre performance during the production of Charles Dickens’s “The Haunted Man” in 1862.

Reviewing the former experiments, the Pepper Ghost holographic projector V.01.1 is a model that is based on the basic law of reflection, which is creating a ghostly image as a reflection of an actual object on a transparent mirror. As a mirror image, the ghostly image is a negative or opposite direction from the actual object. Meanwhile, the Pepper Ghost holographic projector V.01.2 is the basic model for further development, which is successfully installing a simple image inverting mechanism that makes the ghostly image as same as the actual image. In a simple explanation, the image inverting mechanism is adding a flat mirror to reflect the actual object and create a negative image, which is to be reflected or appear in the 45-degree transparent sheet as a ghost illusion that is similar to the actual object or a positive image. 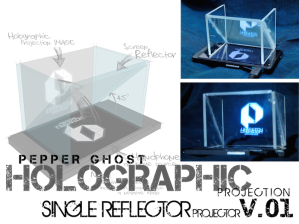 The Pepper Ghost Holographic Projector V.01.3 experiment is trying to develop a connection between the Pepper’s Ghost illusion and physical object. Based on notes from the V.01.2 experiment, the implementation of inverting mirror made the source image reflected twice caused an affect the final result, which is the accumulation of distance between the actual image, flat mirror and transparent reflector brought the ghostly image reflection equal with the distance accumulation and seems projected far behind the box.

Under this phenomenon, The Pepper Ghost Holographic Projector V.01.3 experiment is focusing on building a compartment to support the connection between the illusion image and the physical object, which is more into the measurement of the projection image result distance from the 45-degree clear screen as a point to determine the location of physical object base on its value, such as became the foreground, the background, or became at the same level with the holographic projection result. 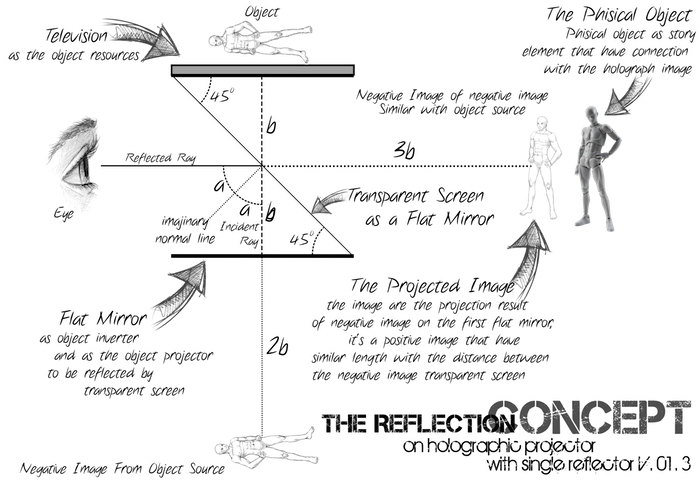 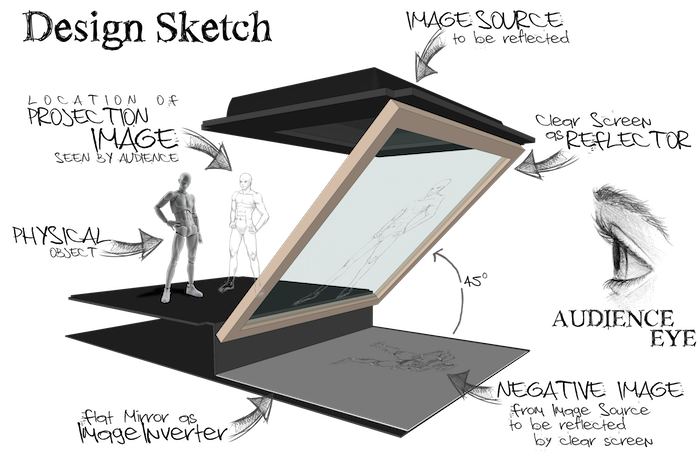 The concept became based on designing and developing the Pepper’s Ghost Holographic Projector With Single Reflector V.01.3 model. Furthermore, some ideas also determined the projector design, such as:

During the test of Pepper’s Ghost Holographic Projector V.01.3, an animated video will be played simultaneously on the 17″ television that is hidden in a small image source compartment to be reflected or projected by both of flat mirror and a diagonal transparent sheet to the physical object compartment that already placed an old Storm Lamp. The connection between the animated video as “the ghost” and the old lamp as a physical object is arranged to build the story with the title “The Ghost Lamp“

The result of the Pepper’s Ghost Holographic Projector With Single Reflector V.01.3 development

The V.01.3 prototype and schematic became the base of several Peppers Ghost Holographic Projector models development for an exhibition installation so-called “The Lucid Memories” as part of the Lifepatch exhibition projects under the framework of Europalia Indonesia 2017 in Belgium.

The first model was a V.01.3 enforced with a steel structure. The model was designed as a single object that could become both a stand-alone installation and part of a bigger exhibition concept. However, the structure’s main function wasn’t only to support the wooden box, it also became the box height adjustment to achieve the spectator’s eye level. Produced with help of Wiratmo Amin Nugroho, a craftsman and also a musician from Salatiga city, the model was supported with a knock-down system and designed as part of the Lifepatch exhibition with the title “IN SITU: Lifepatch – The Tale Of Tiger And Lion” in Museum van Hedendaagse Kunst Antwerpen (M HKA) – Antwerp at 16 September 2017 until 7 January 2018.

The second model was a mini V.01.3. The model was designed for a tablet computer with a 10″ display size as the source image or object. Produced with help of the Pro-Studio, an acrylic cutting laser small company in Yogyakarta, the mini V.01.3 was built with 3 mm thick acrylic combined with a 1,5 mm flat mirror as the image inverter and 3/4 mm plexiglass as the transparent sheet reflector.

The mini V.01.3 model itself was designed with the title “The Lucid Memories” installation as part of all the Lifepatch exhibitions during Europalia Indonesia 2017 in Belgium, which were the “IN SITU: Lifepatch – The Tale Of Tiger And Lion” exhibition in the Museum van Hedendaagse Kunst Antwerpen (M HKA) – Antwerp and the “Tano Toba Saga” within the “Power and other things: Indonesia & Art (1835-now)” in Palais des Beaux-Arts (BOZAR) – Brussels at 18 October 2017 until 21 January 2018.