“Archaeological destinations: Borobudur, Indonesia” Teks by Wawies – Wisnu Wisdantio was published in www.helium.com since 2009 before the Helium Publishing sites shutting down in 2014. 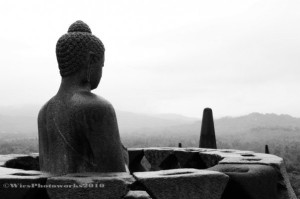 The temple of Borobudur was built on a lake like a lotus flower floats on the pond. Thus the alleged W.O.J Nieuwenkamp, an artist and architect from the Netherlands wrote a book called Fiet Borobudurmeer (The Lake of Borobudur) in 1931. The first accusation denied by Dr. Theodoor van Erp, who was a Dutch army officer in charge of the first restoration of Borobudur in 1907 Until 1911, it is considered not supported by strong evidence. The beginning of a long discussion that happens almost half of a century.

The trip begins by exploring all the three main temples in the plains of Kedu. Following the epigraph of Kayumwungan that made in 824, and the epigraph of Kahulunan that made in 842, which tells that at the same time was built three temples, located on a straight line from east to west. Then the journey starts from the most easterly temple, that is the temple of Mendut. Mendut temple was built by the King of Cri Sanggramadananjaya, the first king from the Dynasty of Syailendra. This temple is the oldest of temple which is on it walls carved a lot of relief that told about the Buddha’s first sermon.

Continuing about 1150 meter westward from Mendut temple until reaching the Temple of Pawon, that usually also called as the temple of Brajanalan. This temple was built by Pramudyawardani. According to some sources, this temple is the liaison between Mendut and Borobudur Temple. It can be seen from the reliefs in the temple that featuring an opening stories for various stories that depicted in the reliefs at Borobudur. 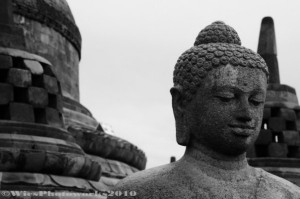 The further away walked to the west as far as three kilometres from Mendut, until reaching the greatest and most magnificent temple called Borobudur. The temple was built by the Sangha Mahayana Buddhism followers under the leadership of Samaratungga the king from the Syailendra dynasty at the 8th century. Until recently the Borobudur is very famous as the largest Buddhist temple in the world. Not only because of the extraordinary size of the footprint area that reaches 15 thousand square meters and a total height of 42 meters. But also because of the 1460 relief panels contain as many as seven stories sourced from Buddhist sutras that spread over six of ten levels on the temple. Not only that, dozens of stupas contain statues of Buddha in various positions in the last three levels and ended by the giant stupa on the top of the temple.

The trip continues through archaeological and geological tourism, which has been the subject of much debate for archaeologists on the hypothesis Nieuwenkamp. Travel to find the ancient lake on the plains Kedu. Uniquely, the archaeological debate has made a biology expert from India named G. Thanikaimoni interested to come to the plain Kedu in 1983. but unfortunately, his research to discover the existence of a water plant fossils as evidence of the existence of the lake ecosystem failure. One mystery behind the splendor of Borobudur began to unfold after the research team from the UPN Veteran Yogyakarta membered some experts like Helmy Murwanto, Sutarto, and Sutanto, discovered the existence of black clay deposits at the base of several rivers around the Borobudur Temple, like the River Sileng, Progo, and Elo.

From the results of preliminary research, it turns out that the black clay contains a lot of pollen of aquatic plants in lake ecosystems, such as Commelina, Cyperaceae, Nymphaea stellata, and Hydrocharis, as well as wood fossils. Not only that, black clay deposits are known to have 660 years old. Departure from these results, the team drilled as deep as 40 meters in 2001. And the result was the discovery of black clay that has been around 22 thousand years old. Important discoveries that later became the basis for the team of geologists to conclude, that on 22 thousand years ago (Pleistocene era) and ended in the late 10th century until the 13th century, most of the plains Kedu is a lake.

Although there had been no further studies, this may explain why some regional names around Borobudur have a toponym (the origin of the naming) name associated with water. Some of them are Bumi Segoro village in the south-west of Borobudur (Bumi means the land, and Segoro means sea or lake), or Sabrang Rowo village in the south side Borobudur (Sabrang means to cross, and Rowo means marsh).

Further explore the geological site on the plains of Kedu as far as three kilometers until reached the village on the south side Candirejo Borobudur Temple. In this tourist village, can be found in a salted water source there are also could be found in some other villages, such as Sigug and Ngasinan. Although there has been no research that strengthens, some researchers suspect that this is related to the existence of the ancient lake. Resolving archaeological adventure in the plains Kedu, closed down by exploring the tourist village Candirejo. In this village, besides used as venues for local cultural performances, such as the Jathilan that also usually called Kuda Lumping performance art and Gamelan Orchestra. There are a many craft gallery could be found in this village. Besides offers local handicrafts made by the occupation, it also offers craft-making workshops for the visitors. In the village Candirejo and some other tourist villages around Borobudur Temple, there is a lot of homestay for tourists who want to stay longer in the plains of Kedu.

Complement the archaeological tour in the plains Kedu, there are also tours to enjoy the beauty of the landscape, such as enjoying the beautiful sunrise at the top of Tuk Stumbu. Tuk Stumbu is the local language to call the Stumbu hill (Tuk means hill). This hill is located approximately two kilometers on the south side of the temple of Borobudur, precisely located in the row of Menoreh hills. The scenery of Kedu plains that covered with thick fog blanket is the main object that offered when on the top of this hill. The uniqueness of scenery that can be obtained is shown by several peaks Borobudur stupa emerging from the mists like a rock in the middle of the ocean that surrounded by the Mount Merapi, Merbabu, and Telomoyo.