“The Coffee Culture of the Belitung People in Indonesia” Teks by Wawies – Wisnu Wisdantio was published in www.helium.com since 2009 before the Helium Publishing sites shutting down in 2014. Since 2015, this article published in www.pitlanemagazine.com.

Coffee is a beverage with the basic material of plant seeds from Coffea Sp. Since found in Ethiopia on the continent of Africa nation, coffee has become one of the drinks are very popular and beloved by various society in many countries. Nowadays, coffee is not only just a beverage, but it has become a part of the community socialisation.

The community of Melayu People in Indonesia, especially on the island of Belitung, they have a unique culture in how they enjoy coffee. Belitung, in local language called Belitong, is an area of 4595 km2 of the island which was once known as one of the largest tin mining areas in Indonesia. However, since the collapse of PT Timah, the largest owner of Indonesian Tin Mines, on April 29, 1991. The name of Belitung Island (in English, Billiton) started to fade off and leaving a grim life story.

Not only that, the coffee on the island of Belitung is presented in a way that also has unique characteristics. If elsewhere blended and brewed coffee in the glass, in Belitung, coffee is mixed and blended in the metal pot. Only then by using special filters made of cloth with a form similar to the socks, the coffee poured into a glass without any single coffee powder on it. 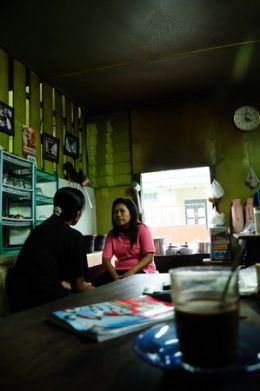 For the people of the Melayu in Belitung, drinking coffee has become a tradition and local culture. Like many coffee shops on the plains of Europe and several countries in the Middle East, coffee culture also occurs in The Hong Djie coffee shop that located not far from the harbour of Tanjung Pandan, Belitung. In that simple wooden building, people of Belitung are usually enjoying Kopi O in the middle of their daily activities. Kopi O is the local name for black coffee that so thick and dense. The Hong Djie coffee shop that the owner had stepped on the third generation, is just one of the many coffee shops in the Belitung that had been used by people of Belitung as a place to meet, socialise, and discuss every event that occur both inside and outside of the Belitung island.

Uniquely, this socialisation not only occurs between people who know each other, but also with visitors from the outside of the island that also visited the coffee shop. Therefore not surprised when one of Belitung citizen who called as Pak Antok, said that not many people in Belitung are subscribing newspapers. It happens because of all the information and news what they need are already available at the coffee shop.

Can not be denied if this habit is often regarded by some people as one of a form of laziness. If we look at it more closely, this is not a form of laziness, but this is the way of the people of Belitung Island to create a harmonious life together.